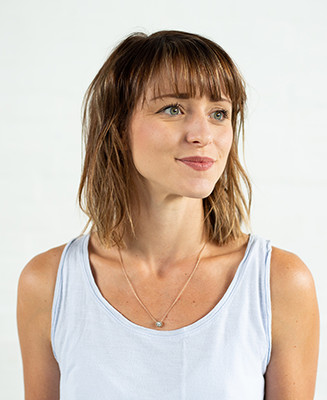 KJ currently performs for Stopgap Dance Company and Commotion Dance. KJ integrates release technique, flying low and yoga into her dance practice. KJ began her contemporary dance training at The University of Chichester graduating with a 1st Class BA (Hons) degree in 2010, after which she went on to join Transitions Dance Company where she toured internationally and gained her Masters Degree in Dance Performance from Trinity Laban (MA).

For the past 13 years alongside her dance career, KJ has developed a love for Yoga. At the beginning of 2017 KJ attained her Ashtanga and Vinyasa teaching qualifications at Sampoorna Yoga, India. KJ loves to share her practice and teach others, she has also had experience in Partner Yoga, Thai Yoga Massage, Yin and Hot Yoga.

KJ gives much of her time to both the yoga and dance ecology in teaching, producing and co-creating community dance projects. KJ teaches a full range of ages and styles including teaching as an associate lecturer at the University of Chichester since 2014.

Manage Cookie Consent
To provide the best experiences, we use technologies like cookies to store and/or access device information. Consenting to these technologies will allow us to process data such as browsing behavior or unique IDs on this site. Not consenting or withdrawing consent, may adversely affect certain features and functions.
Manage options Manage services Manage vendors Read more about these purposes
View preferences
{title} {title} {title}